Divisibility Rules: Quantitative Aptitude Section There are some specific rules by which we can determine the divisor of the given number. Today I wil

Triangle = Figure with three sides.  Study the following triangle: A,B,C to points. a, b, c to sides. x, y, z to angles. 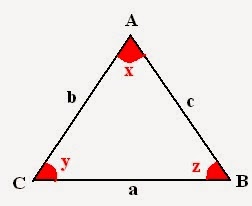 Following triangle is a right angle triangle i.e. a triangle with one out of three 90^o angle. 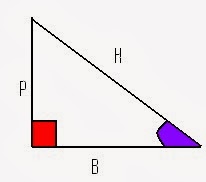 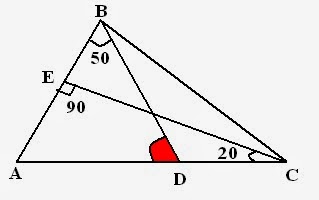 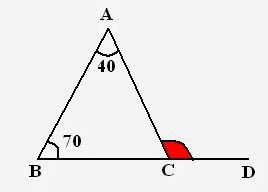 Solution: In above figure, ACD is an exterior angle, and according to property, Exterior angle = Sum of interior angles Therefore, ACD = \(70^o\) + \(40^o\) =\(110^o\)
This is not the end of this chapter. These are just the basics. In next session, I will discuss some important results, properties (congruency, similarity) and much more. Always remember, Geometry needs practice and time.

Simple or linear Equations: Tricks and Examples. I have already discussed a concept - Quadratic Equations of quantitative aptitude. Today I will discuss some examples of simple equations which have been proved to be a very important topic for various competitive exams. The problems of linear equations can be easily solved by using simple tricks. Lets discuss how.

4.7 A multiprocessor with eight processors has 20attached tape drives. There is a large number of jobs submitted tothe system that each require a maximum of four tape drives tocomplete execution. Assume that each job starts running with onlythree tape drives for a long period before requiring the fourthtape drive for a short period toward the end of its operation. Alsoassume an endless supply of such jobs.
a) Assume the scheduler in the OS will not start a job unlessthere are four tape drives available. When a job is started, fourdrives are assigned immediately and are not released until the jobfinishes. What is the maximum number of jobs that can be inprogress at once? What is the maximum and minimum number of tapedrives that may be left idle as a result of this policy?
b) Suggest an alternative policy to improve tape driveutilization and at the same time avoid system deadlock. What is themaximum number of jobs that can be in progress at once? What arethe bounds on the number of idling tape drives?

Basic facts and techniques of Boats and Streams of Quantitative Aptitude Boats and Streams is a part of the Quantitative aptitude section. This is just a logical extension of motion in a straight line. One or two questions are asked from this chapter in almost every exam. Today I will tell you some important facts and terminologies which will help you to make better understanding about this topic.