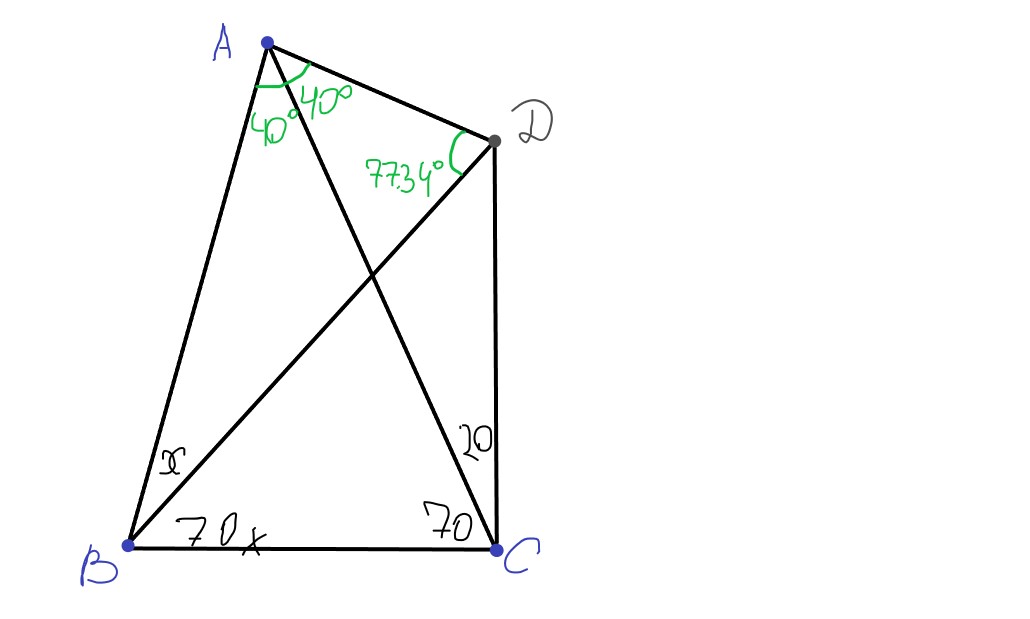 After some manipulation we get 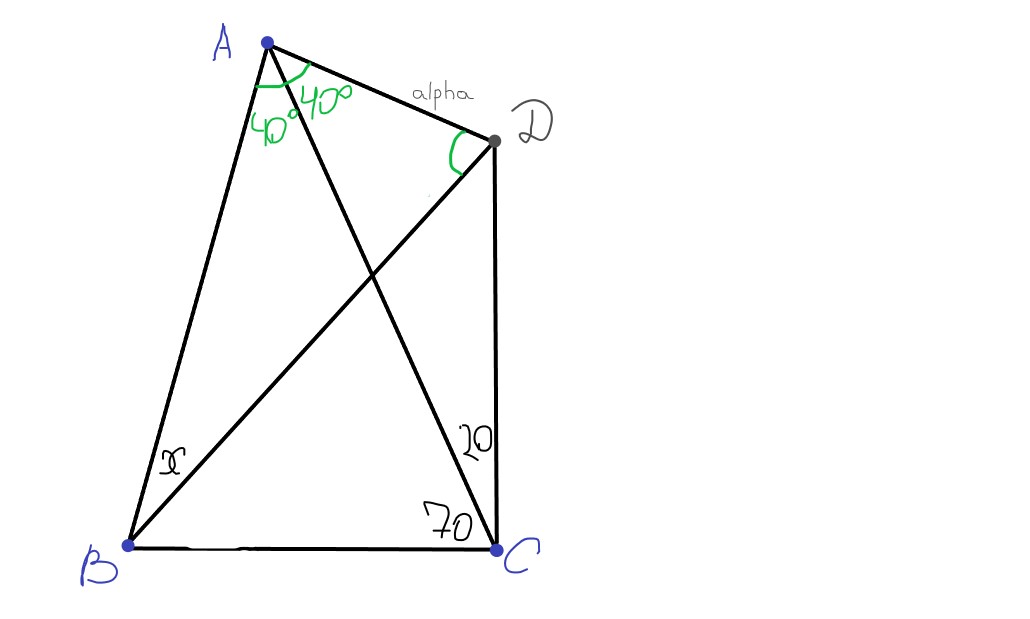 And, by applying the law of sines to the triangle ABD, we get that:

What is the measure of in the figure below?
For reference: In the figure shown P and Q are points of tangency and . Calculate "x". 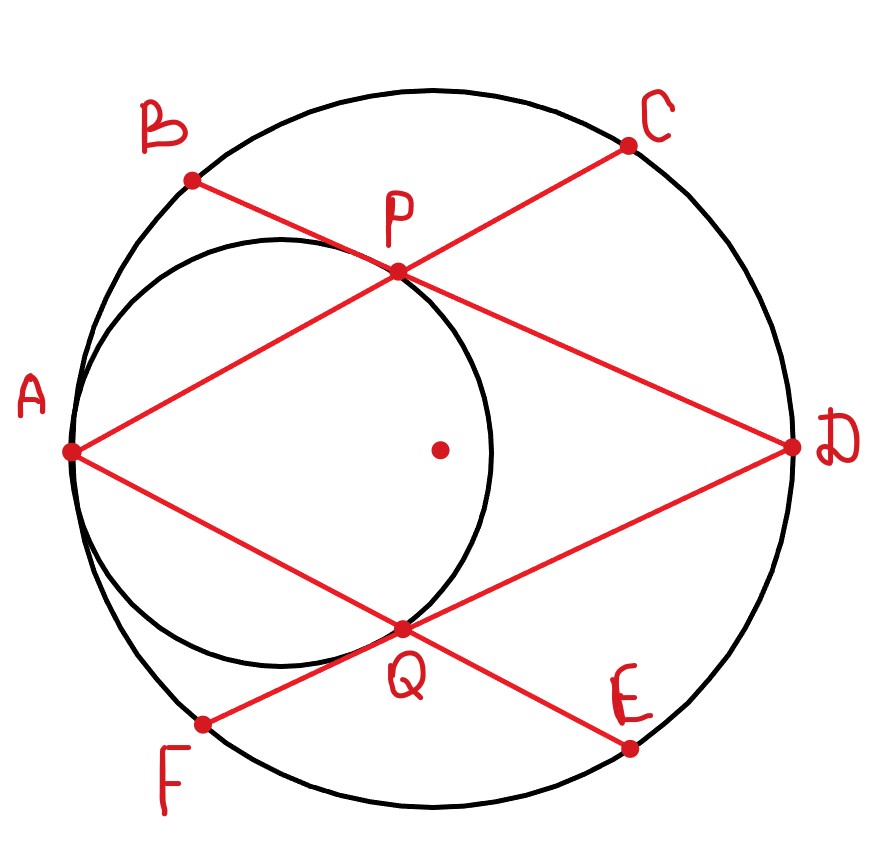 For a triangle ABC, prove that angle C is a right angle if and only if the median of side c is c/2

In the following figure, . Also and . Find the area of quadrilateral ABCD. 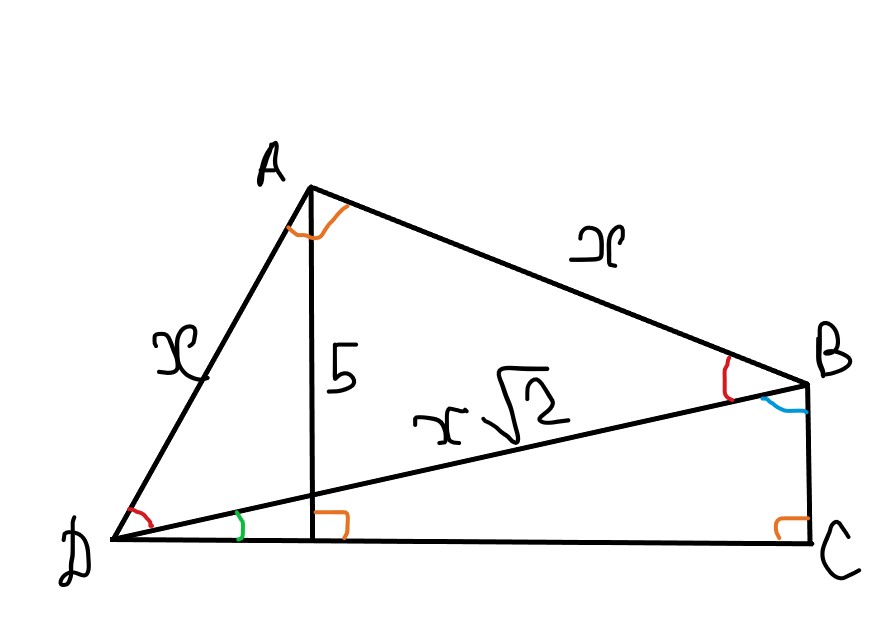 the perimeter of the rhombus is 40. and one of the angles is 30 degrees. find the area of ​​the rhombus

What's an example of a true conditional statement with a true converse?

Finding volume of solid
Suppose that a solid is formed in such a way that each cross section perpendicular to the x-axis, for , is a disk, a diameter of which goes from the x-axis out to the curve .
Find the volume of the solid.
For this I use the disk formula. So .
When I do this, I get . The answer is . What am I doing wrong?
Distance between (-6,-6) and (3,5)?
Finding the volume of a solid region
I'm trying to find the volume of the solid region inside the sphere , and the upper nappe of the cone (I only have to set up the triple integral itself, not evaluate it).
So, I need to do this in cylindrical coordinates. Thus, for the r value, since , . Thus, .
Next, I need to determine the value of z. I've considered the fact that , and . Thus, . This is equivalent to . Thus, . This would be the lower limit, because it came from the equation of the cone. For the upper boundary of z, I'm not completely sure. Any help with this would be greatly appreciated.
Finally, for , I think it would be 0 to , since it is the solid region inside a sphere.
I'm not extremely confident in my abilities yet, and I don't want to lead myself astray. Any help/corrections would be greatly appreciated!
O is intersection of diagonals of the square ABCD. If M and N are midpoints of OB and CD respectively ,then 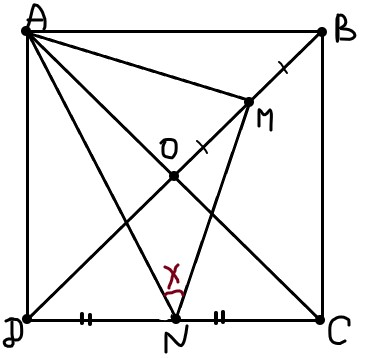 Continuous/probability version of arithmetic/geometric mean inequality
If one has a random variable X, described by a finite probability distribution with equally likely possible values , then the inequality: is a reformulation of the arithmetic/geometric mean inequality.
And a necessary and sufficient condition for equality (maybe only if the distribution is concentrated at one point, for example)?
Geometric Interpretation of Independence of Random Variables on the Standard Probability Space
Let be the standard probability space on [0,1] with , the Lebesgue measure. What do independent random variables "look like" in this space? Is there an easy geometric approach to creating independent functions on this space?
Distance between (-4,3,0) and (2,-3,1)?
Distance between (1,-6) and (4,7)?
Hexagon ABCDEF has sides AB and DE of length 2, sides BC and EF of length 7, and sides CD and AF of length 11, and it is inscribed in a circle. Compute the diameter of the circle.
Why is the diameter of the circle?
The conveyance of a triangular channel with side slope 1 horizontal: 1 vertical is expressed as K=C y8/3, where C equals