Blericker74 2022-07-13 Answered
New "gravity force" analogous to magnetic force?
I was watching Eugene Khutoryansky's physics video about Einstein's Gravito-Electromagnetism, Gravity of moving mass in General Relativity . In that, he discussed why maxwell's electromagnetism laws hold for special relativity also. He took the following situation:
Adam is in a spaceship or the reference frame of two charged particles such that their gravitational force cancels their electromagnetic repulsion. Adam would see no magnetic force since charges are at rest according to his frame. Now Sarah is watching Adam from a ground reference and sees the charges moving and hence they must exert an attractive magnetic force pushing particles towards each other. But now Eugene, said that a force (gravity) analogous to the magnetic force produced by moving charge, is produced by moving mass, which will be repulsive, and will balance the attractive magnetic force.
Now I became confused here, what is this "new gravity force"? I never heard about it before, at least in high school. Is it a mathematical trick or tweaking? Or is there really is a repulsive gravitational force that is exerted by moving masses? So this is my doubt here, can someone please explain this further?
Ask Expert 2 See Answers
You can still ask an expert for help
Your answer

verzaadtwr
Answered 2022-07-14 Author has 17 answers
It makes sense that you had never heard of it in high school: this is actually a prediction of General Relativity, a subject complicated enough that many physicists will only study it in depth after they had already concluded undergraduate school. In this answer, I'll try to give you a general idea without going too deep into the mathematics.
First of all, General Relativity does not treat gravity as a force. Instead, gravity is understood as spacetime curvature: the reason things fall is because spacetime is curved, and hence things move in curved paths as a consequence. Think for example, about an ant moving on a rolled up sheet of paper: if the ant moves always straight ahead, it might still find itself back where it started, for example. It moves in curved paths not because of some force, but simply because it's moving on a curved surface. Gravity works in a similar way.
Now, the mathematics of General Relativity is quite complicated, and sometimes we want to avoid dealing with it in full detail. If the gravitational fields are not too intense (in other words, if we're interested in a problem where spacetime is not too curved), we can approximate the gravitational field with a force. For very weak fields, that is the Newtonian theory you learn at school. Newton's gravity is a weak field limit of GR. However, we can do slightly better.
Given GR, we can consider a simple distribution of matter, such as a possibly moving mass. Doing the calculations in GR and making a few approximations, we can get to something called Gravitoelectromagnetism. This approximation treats the gravitational field in a way very similar to how we treat electromagnetic phenomena. It is not as precise as full GR, but it is much simpler, and hence we often prefer to use it instead of solving the full complicated equations. In Physics, at the end of the day we're interested in comparing out computations to experiment, so as long as your experiment is not so sensitive that it will notice the problems of your approximation, this is fine.
In this approximation, you can see exactly the effect you mentioned: there appears a gravitational analogue of the magnetic field, leading to results just as the one you mentioned. Notice that this is not "a new force": instead, it would be more fair to say it is a consequence of the fact that gravity is not even a force to begin with. This effect is not a mathematical trick, it is real, as pointed out in the comments. The thing is it is really subtle, so it is quite difficult to notice it in most situations.

Wisniewool
Answered 2022-07-15 Author has 3 answers
Adam is in a spaceship holding two magnets so that force exerted by his hands cancels their electromagnetic repulsion. Adam would see no electric force since magnets are at rest according to his frame.
Now Sarah is watching Adam from a ground reference and sees the magnets moving and hence they must exert an attractive electric force.
A force, analogous to a magnetic force produced by moving charge, is produced by moving magnet, moving muscle, moving planet, moving anything. Which is a good thing as forces that are balanced in one frame are balanced in other frames too.
To clarify a bit, the "magnetic force" for moving magnets is electric force. Which has been known since 1905, at least.

Two small charged objects repel each other with a force F whenseparated by a distance d. if the charge on each object is reducedto one-fourth of its original value and the distance between themis reduced to d/2, the force becomes:
a)
b)
c)
d)
e)F

Three identical blocks connected by ideal strings are being pulled along a horizontal frictionless surface by a horizontal force  The magnitude of the tension in the string between blocks B and C is T=3.00N. Assume that each block has mass m=0.400kg.
What is the magnitude F of the force?
What is the tension in the string between block A and block B?

Resolve the force F2 into components acting along the u and v axes and determine the magnitudes of the components. 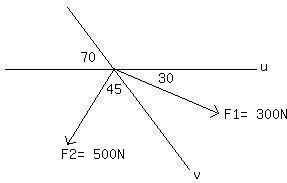 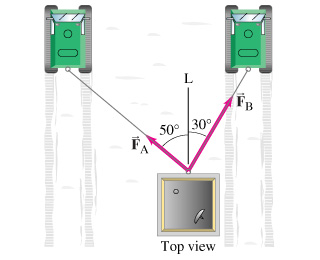 Two snowcats tow a housing unit to a new location at McMurdo Base, Antarctica, as shown in the figure. The sum of the forces  and  exerted on the unit by the horizontal cables is parallel to the line L, and  N. Determine ? Determine the magnitude of ?

What is the reason behind that? For magnetic force, why is magnetic flux density is used instead of magnetic field?

How Can There Be Magnetic Force Without Velocity
Suppose there is a space with constant magnetic field, and a charged particle is moving in that space with a constant velocity, ofcourse it experiences a magnetic force and gets deflected.
But the particle it not necessarily moving wrt all frames. There may be some frame for which the particle doesn't move at all but still gets deflected. How is this possible, there must be some velocity for the particle to experience any deflection under influence of a magnetic field?
Also a still particle in the same space doesn't experience any deflection. True, but the same particle may be moving wrt to some other frame without experiencing a magnetic force, so here we have a velocity but no magnetic force case.
I remember I have used the relation a lot before, but I am afraid to use it any more, these things are really confusing.

A proton is placed in a uniform electric field of  Calculate:
a) the magnitude of the electric force felt by the proton
b) the proton’s acceleration;
c) the proton’s speed after  in the field, assuming it starts from rest.

Give three examples of mechanical waves. How are these different from electromagnetic waves, such as light waves?
The volume control on a surround-sound amplifier is adjusted so the sound intensity level at the listening position increases from 23 to 61 dB.
What is the ratio of the final sound intensity to the original sound intensity?
I have been given the potential of a simple harmonic oscillator:

I want to calculate the value of a particle moving in this potential, with initial conditions and . How would I go about doing this in simple classical mechanics?
Q/4 In terms of resistivity and conductivity
Oil is high or low
Water is high or low
How much greater is the intensity of a 25-dB sound than a 15-dB sound? What would be the intensity in dB for a sound that is 100 times louder than the 25-dB sound?
Does light frequency change in water?
Explain the concept of Ampere’s Law and cite at least two (2) importance
A metal pipe is held vertically, and a bar magnet is dropped into it What do the electric field lines in the pipe look like as the magnet falls through it?
A simple pendulum has length 20cm.it was displaced at an angle and then released to execute simple harmonic motion. How much time is required for the pendulum to reach maximum speed?
A bar magnet is repelled when an electromagnet is brought close to it. Describe how the bar magnet would have moved if the current in the electromagnet had been reversed.