Janessa Olson 2022-07-07 Answered
Non-geometric Proof of Pythagorean Theorem
Is there a purely algebraic proof for the Pythagorean theorem that doesn't rely on a geometric representation? Just algebra/calculus. I want to TRULY understand the WHY of how it is true. I know it works and I know the geometric proofs.
Ask Expert 1 See Answers
You can still ask an expert for help
Your answer

Jenna Farmer
Answered 2022-07-08 Author has 17 answers
The "modern" approach is this : first we define the field (for instance, it's the only totally ordered field with the supremum property).
Then we define what a -vector space is : it's an abelian group with an external action of satifying some axioms.
Then there is a notion of dimension : we can define a vector space of dimension 2.
The notion of Euclidean distance is obtained by defining what an inner product is : it's a symmetric bilinear form such that if . The distance is then . We also have the notion of orthogonality from this inner product.
Well, once you did that, then the Pythagorean theorem is a triviality : (assuming of course that , the orthogonality hypothesis).
Of course all the work went into the definitions, which is contrary to the basic approach of geometry which deduces properties of distance from a set of axioms (generally ill-defined, but it can be made precise with a little work).
The interesting thing about this modern approach is that algebraic structures come before geometric content. This is powerful because algebraic structures have enough rigidity. For instance, if you start with a set of points and lines satisfying some incidence axioms, it's very hard to define what it means that it has a certain dimension. But if you have a vector space structure, then it's easy.
Of course it can be a little disappointing beacause it feels like we "cheated" : we made the theorem obvious by somewhat putting it in the definitions. But on the other hand, it's very clear and precise : can you properly define what distance or an angle is using "high school geometry" ? Not so easy. Even in Euclide's Elements, this is kind of put under the rug as "primitive notions". This approach makes everyting perfectly well-defined and easy to work with.

For each of the following, can the measures represent sides ofa right triangle? Explain your answers.a. 3 m, 4 m, 5 mb.

for N=2 this is pythagorean theorem

Deduce the Pythagorean Theorem [duplicate]
Let V be an inner product space,and suppose that x and y are orthogonal vectors in V.We also know .My question is how can we deduce the pythagorean theorem in from it.If possible give geometrical views.
Any help will be greatly appreciated.
thanks!! in advance.

How does the attached figure prove the Pythagorean theorem? 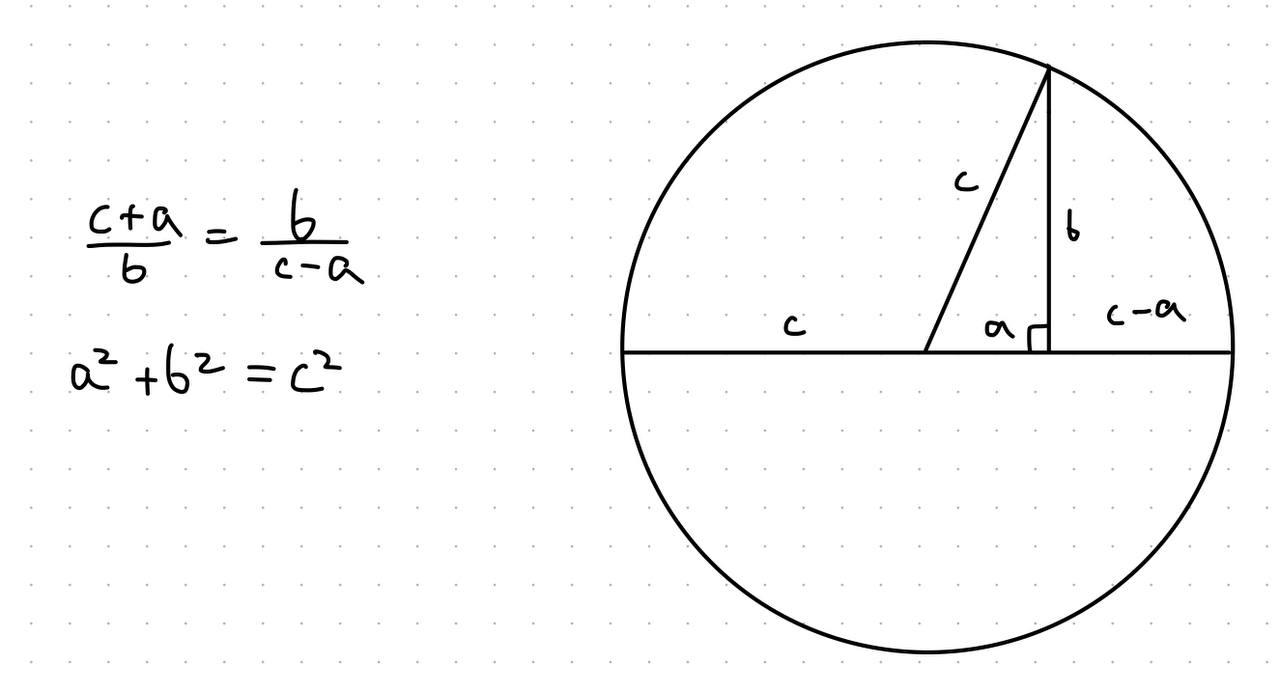 An airplane starting from airport A flies 300 km east, then 350 km at 30 degrees west of north and then 150 km north to arrive finally at airport B. The next day, another plane flies directly from A to B in a straight line. In what direction should the pilot travel in this direct flight? How far willthe pilot travel in the flight? Assume there is no wind during either flight.

A certain discrete random variable has probability generating function:
Compute . (Hint: the formula for summing a geometric series will help you expand the denominator)."
How to recognize what type of probability distribution to use in solving probability problems?
Bernoulli's, Binomial, Geometric, Hypergeometric, Negative binomial, Poisson's, Uniform, Exponential, Normal, Gamma, Beta, Chi square, Student's distribution.
I would like to know how and when to use each of these distributions when solving problems in probability. If possible, make analogy with combinatorics (when we use permutations, variations and combinations).
Minkowski difference of two convex polygons
I just want to make sure that the following algorithm is correct for computing the Minkowski difference of two shapes A,B:

Where CH(S) is the convex hull of the set S and a,b are the vertices of the two polygons.
What is the distance between (5,-2,4) and (8,8,-1)?
Finding volume of a cone through integration
I am trying to find the volume of a cone using integration through horizontal slicing. The cone has a base radius of 10cm and a height of 5cm.
I am assuming this means I should integrate with respect to y, but I am not entirely sure how to set this up. I know that volume of a cylinder is given by the following:

So I am assuming that the integral would be:

I am not sure how the x value of the radius 10cm (since it is not with respect to y) should fit into the equation, though.
Also, sorry for the pseudo-code style. I do not know how to use the math typesetting yet.
What is the distance between (2,-6) and (4,-4)?
Solving a triangle, given two sides and the measure of the included angle
Let say you have a triangle
, side and
Can you use pythagoras theorem to find the side a? and how can you find Angle B and C
Is it possible to prove directly that even perfect squares have even square roots? Or, symbolically:

Let be a polynomial of degree with distinct roots outside the real line.
We have

Do we have a proof relying on rudimentary techniques?
Geometric probability
Inside a square of side 2 units , five points are marked at random. What is the probability that there are at least two points such that the distance between them is at most units?