(Euler line) Prove that the orthocenter M, the center O of the circumscribed circle and the barycenter S are collinear. The point S divides the segment OM in the ratio 1:2.

geduiwelh 2021-01-13 Answered
(Euler line) Prove that the orthocenter M, the center O of the circumscribed circle and the barycenter S are collinear. The point S divides the segment OM in the ratio 1:2.
Ask Expert 1 See Answers
You can still ask an expert for help
Your answer

Step 1
We know that, the line on which orthocenter, circumcenter and barycenter(centroid) lie is called Euler Line of the triangle.
Now let a triangle and its medial triangle is 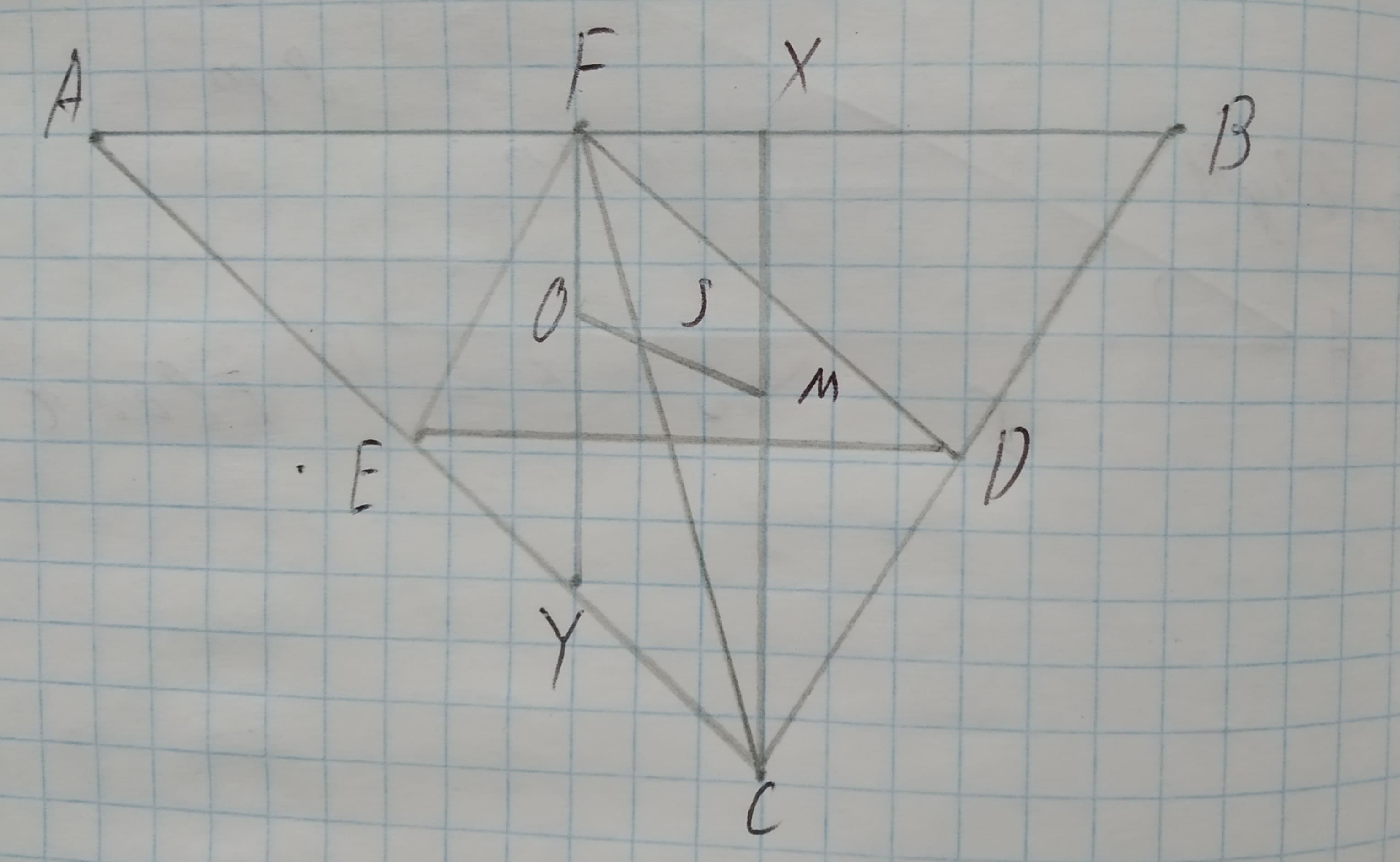 Here O is orthocenter, M is circumcenter and S is barycenter.
Here we can say is similar to because D, E and F are the midpoint of lines BC, AC and AB respectively.
And also

Since and FY is the perpendicular bisector of AB. So we can say

So alternate interior angle of transversal, when transversal intersect two parallel lines are congruent.
So

Hence we can say O, S and M are collinear and S divides the line segment MO in the ratio 1:2.

Find the point on the line that is closest to the origin.

Find the radius of a circle whose area equals the sum of the areas of two circles with radii 3 in. and 4 in.


Determine the values of m and n and the length of RB.

and .
About the line

I want to write an algorithm that morphs or transforms an arc of a circle to a straight line joining both ends of the arc. I would like to understand the maths behind this such a transformation. How can this be done?

The area of a triangular sail for a boat is 176 square feel. If the base of the sail is 16 feet long, find its height.

I am trying to compute this integral using the residue theorem. To do so, I am integrating in the frontier of this sector of a circle: .

I kwo how to deal with the integrals over the horizontal segment of the sector and over the arc of the circle. My problem is the "diagonal segment". When I parametrize it, I do not get something easy to integrate. How could I approach this?

(The path of integration was suggested in my book, so I do not think that is the problem).
What is the distance between (8,0,6) and (1,-4,5)?
MathJax(?): Can't find handler for document MathJax(?): Can't find handler for document Find the sum of a probability of dice roll that is prime.
Consider rolling n fair dice. Let p(n) be the probability that the product of the faces is prime when you roll n dice. For example, when =
When
When . Find the infinite sum of p(n) (when n starts at 0) (Hint: Consider differentiating both sides of the infinite geometric series: infinite sum of when )
I can differentiate the two sides of the geometric series but I'm lost regarding what to do after that. I don't fully understand the question.
Finding the volume of a solid of revolution about the x-axis
Let R be the area laying beneath the curve and above the line . Find the volume of the solid of revolution which is created when R is revolved around the x-axis.
I graphed the functions and found out I have to integrate from -1 to 1. I want to use the disc method, but I don't know how to only get the discs with radii higher than and lower than f(x). I thought it would be logical if the radii of the discs would be , but this approach gives me the wrong answer when i plug it into the formula.
Volume of Solid Enclosed by an Equation
I'm having problems finding the triple integrals of equations. I guess it has to do with the geometry. Can someone solve the two questions below elaborately such that I can comprehend this triple integral thing once and for all:
Compute the volume of the solid enclosed by
1.
2.
Volume between under parabaloid
Suppose I want to find the volume between and . Is there a way finding that with a double integral? I tried to use inside the integral and then convert it to polar coordinates...
Distance between (8,6,2) and (3,4,1)?
Distance between (9,1) and (5,2)?
Show that