How does the size of the cross-tabulation table impact the chi-square value.

The chi-squared data is often expressed in a cross-tabulation, where each row represents a level or category of one categorical variable, and each column represents a level or category of the other categorical variable.
The value recorded in a cell corresponding to the \(\displaystyle{i}^{{{t}{h}}}{r}{o}{w}{\quad\text{and}\quad}{j}^{{{t}{h}}}\) column is the value of the variable of interest for the \(\displaystyle{i}^{{{t}{h}}}\) category of the row variable and \(\displaystyle{j}^{{{t}{h}}}\) category of the column category.
Step 2
Explanation:
Suppose there are r rows, that is, there are r levels of the row variable, and c columns, that is, there are c levels of the column variable.
Since the grand total is a constant, and row total = column total = grand total, \((r – 1)\) categories of the row variable and \((c – 1)\) categories of the column variable can take values freely. As a result, row degrees of freedom \(= (r – 1)\), column degrees of freedom \(= (c – 1).\)
For the cross-tabulation, the total degrees of freedom, \(\displaystyle{d}{f}={\left({r}–{1}\right)}\times{\left({c}–{1}\right)}\).
For a chi-squared test, there are two ways to conclude the hypothesis test- using the critical value, and using the p-value.
The critical value for the usual right-tailed test, at level of significance, \(\displaystyle\alpha\) is:
The p-value for the usual right-tailed test, for the statistic value, \(\displaystyle{x}^{{2}}\) is:
Note that, the distribution of the chi-squared test statistic under the null hypothesis, which is the chi-squared distribution with \(\displaystyle{d}{f}={\left({r}–{1}\right)}\times{\left({c}–{1}\right)}\) degrees of freedom, is used in both cases.
Clearly, the size of the cross-tabulation determines the degrees of freedom of the null chi-squared distribution, which, in turn, is the key point in establishing the rejection rule, and hence, forming the conclusion of the chi-squared test of significance. 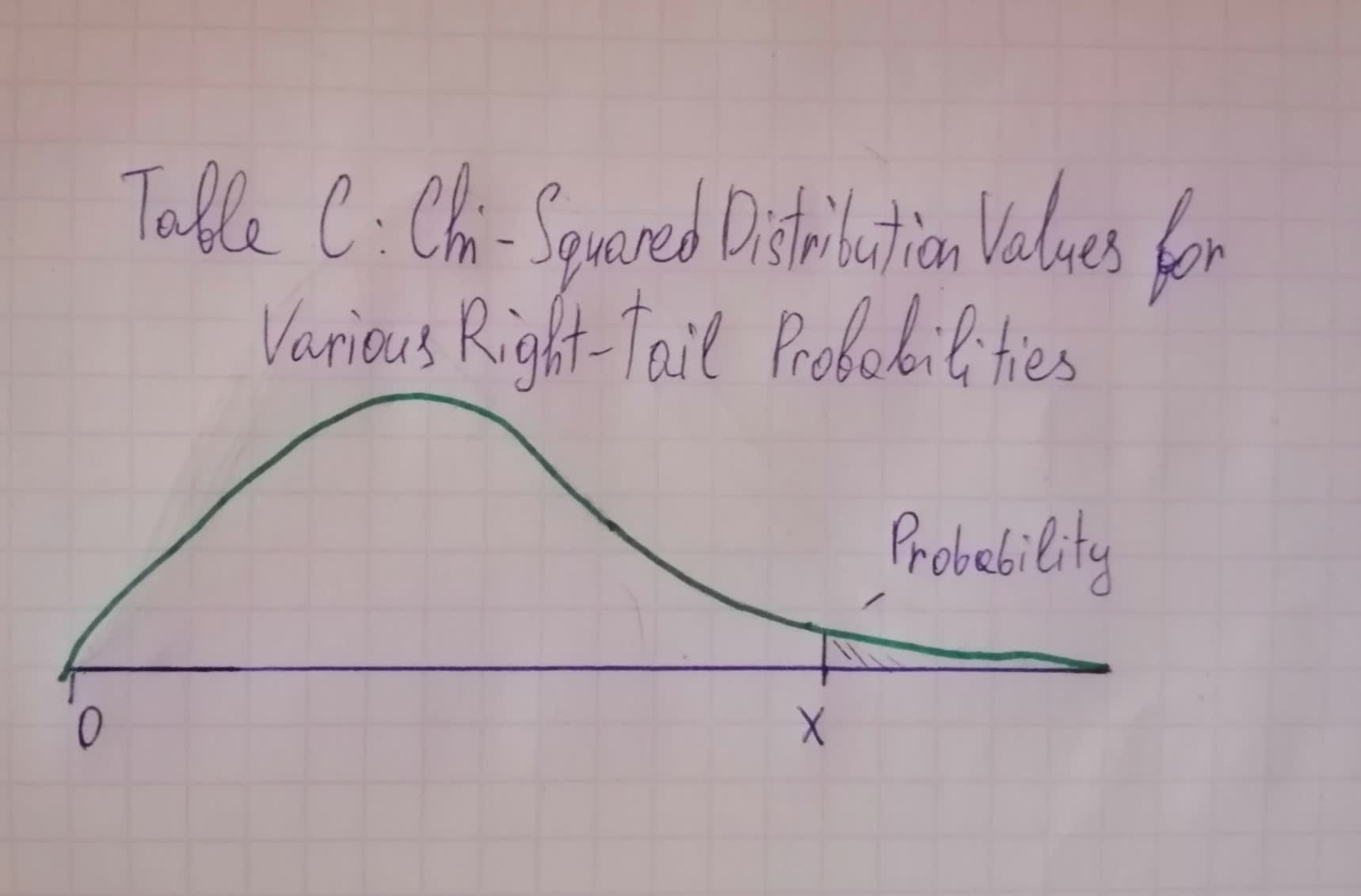 Compare the chi-square p-value and Fisher's exact test p-value and determine which is more accurate.

A) Explain why the chi-square goodness-of-fit test is not an appropriate way to find out.
B) What might you do instead of weighing the nuts in order to use a x2 test?
Nuts A company says its premium mixture of nuts con- tains 10% Brazil nuts, 20% cashews, 20% almonds, and 10% hazelnuts, and the rest are peanuts. You buy a large can and separate the various kinds of nuts. Upon weigh- ing them, you find there are 112 grams of Brazil nuts, 183 grams of cashews, 207 grams of almonds, 71 grams of hazelnuts, and 446 grams of peanuts. You wonder whether your mix is significantly different from what the company advertises.

Explain why the chi-square is called a goodness-of-fit test.

For the following situations, identify the test you would run to analyze the data:
A marketing firm producing costumes is interested in studying consumer behavior in the context of purchase decision of costumes in a specific market. This company is a major player in the costume market that is characterized by intense competition. The company would like to know in particular whether the income level of the consumers (measured as lower, middle, upper middle, and upper class) influences their choice of costume type. They are specifically focused on four types of costumes (funny costumes, scary costumes, clever costumes, and boring costumes).
a. Chi-Square Goodness of Fit
b. Frequencies
c. Descriptive Statistics
d. Chi-Square of Independence

A chi-square homogeneity test is to be conducted to decide whether four populations are nonhomogeneous with respect to a variable that has eight possible values. What are the degrees of freedom for the \(\displaystyle{x}^{{2}}\)-statistic?

Use the one-standard-deviation x^{2}-test and the one-standard-deviation x^{2}-interval procedure to conduct the required hypothesis test and obtain t
Use the information to construct 90% and 99% confidence intervals for the population mean. Interpret the results and compare the widths of the confide
You were asked about advantages of using box plots and dot plots to describe and compare distributions of scores. Do you think the advantages you foun
1. The standard error of the estimate is the same at all points along the regression line because we assumed that A. The observed values of y are norm
Assume the sample is from a normally distributed population and construct the indicated confidence intervals for (a) the population variance σ^{2} and
Let p be the population proportion for the situation. (a) Find point estimates of p and q, (b) construct 90% and 95% confidence intervals for p, and (
Suppose that X and Y are continuous random variables with joint pdf f(x,y)=e^{-(x+y)} 0
For each of the following confidence intervals for the difference between two means,(\mu_{1}-\mu_{2})which mean is significantly larger?a.(-10.5) b.(-10,-5) c.(5,10)
During the production of boiler plate, test pieces are subjected to a load, and their elongations are measured. In one particular experiment, five tes
The General Social Survey (GSS) asked a random sample of adults their opinion about whether astrology is very scientific, sort of scientific, or not a
Random variables X and Y have joint PDF f_{X,Y}(x,y)=\begin{cases}12e^{-(3x+4y)},\ x \geq 0, y \geq 0\\0,\ otherwise\end{cases} Find P[X+Y\leq 1]
When comparing two sets of data values, what is the advantage of using relative frequency distributions instead of frequency distributions?