The exponential models describe the population of the indicated country, A, in millions, t years after 2010.Which country has the greatest growth rate? By what

The exponential models describe the population of the indicated country, A, in millions, t years after 2010.Which country has the greatest growth rate? By what percentage is the population of that country increasing each year?
India,
Iraq,
Japan,
Russia,

The exponential model that describes the population of the indicated country A, in millions,t years after 2010 is
India,
Iraq,
Japan,
Russia,
Here value of k represents the growth rate of population.
Comparing the exponential model from
Standard equation ,
value of k for country
India is 0.008, for
Iraq is 0.019, for
Japan is −0.006 and for
Russia is -0.005
Since country Russia and Japan has negative value of k,
Rightarrow the decay rate or population is decreasing as the time increases.
Now arrange the positive value of in descending order:
Since the country Iraq has greatest value of k, so the country Iraqgreatest growth rate. The
growth rate of population of Iraq each year is

Scientists are working with a sample of cobalt-56 in their laboratory. They begin with a sample that has 60 mg of cobalt-56, and they measure that after 31 days, the mass of cobalt-56 sample is 45.43 mg. Recall that the differential equation which models exponential decay is and the solution of that differential equation if , where is the initial mass and k is the relative decay rate.
a) Use the information provided to compute the relative decay rate k. Show your calculation (do not just cit a formula).
b) Use the information provided to determine the half-life of cobalt-56. Give your answer in days and round to the second decimal place. Show your calculation (do not just cite a formula).
c) To the nearest day, how many days will it take for the initial sample of 60mg of cobalt-56 to decay to just 10mg of cobalt-56?
d) What will be the rate at which the mass is decaying when the sample has 50mg of cobalt-56? Make sure to indicate the appropriate units and round your answer to three decimal places.

Find a recursive rule that models the exponential decay of

In addition to quadratic and exponential models, another common type of model is called a power model. Power models are models in the form Here are data on the eight planets of our solar system. Distance from the sun is measured in astronomical units (AU), the average distance Earth is from the sun. 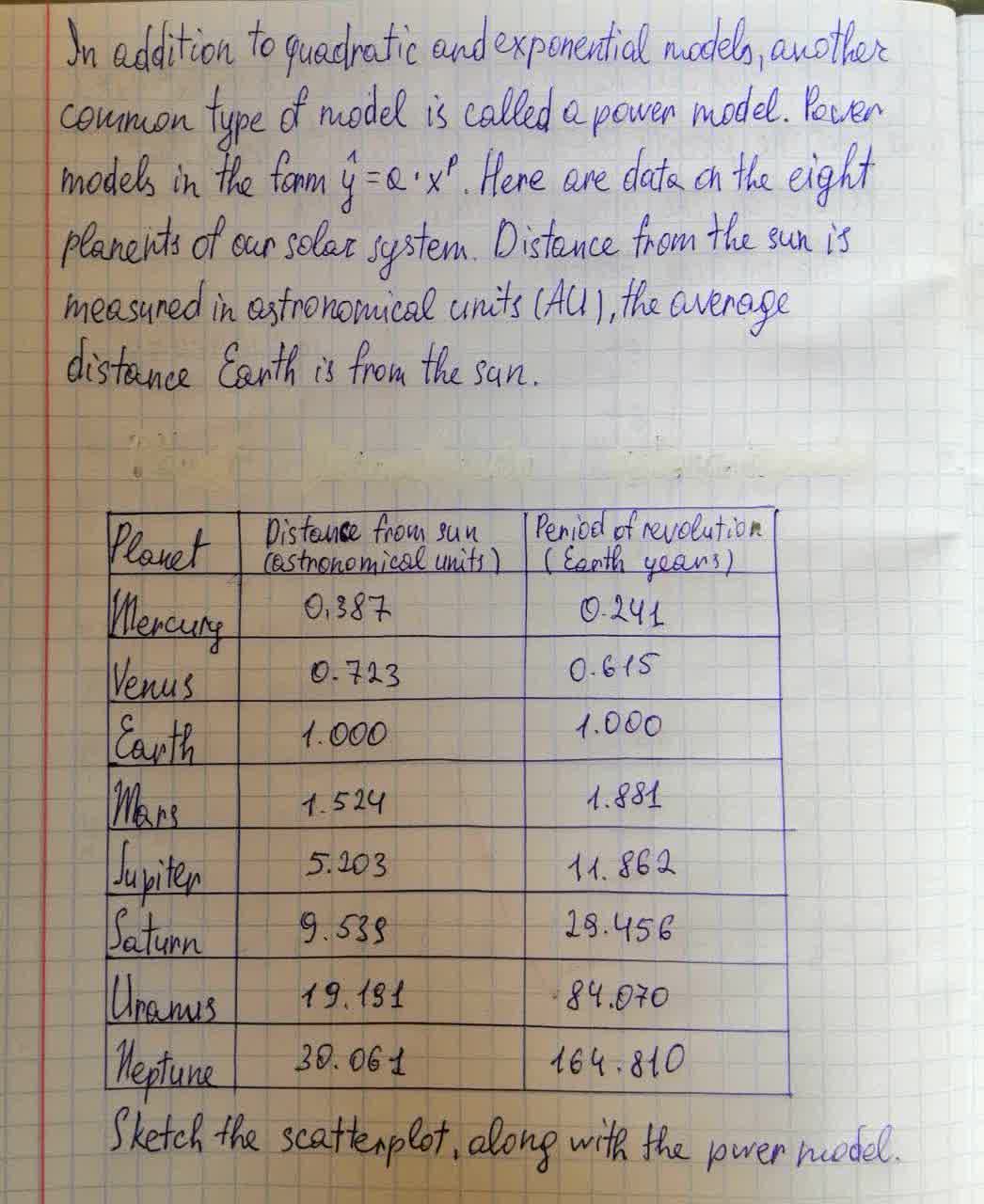 Let V denote rainfall volume and W denote runoff volume (both in mm). According to the article “Runoff Quality Analysis of Urban Catchments with Analytical Probability Models” (J. of Water Resource Planning and Management, 2006: 4–14), the runoff volume will be 0 if and will is the volume of depression storage (a constant) and k (also a constant) is the runoff coefficient. The cited article proposes an exponential distribution with parameter
a. Obtain an expression for the cdf of W.
[Note: W is neither purely continuous nor purely discrete, instead it has a “mixed” distribution with a discrete component at 0 and is continuous for values .]
b. What is the pdf of W for ? Use this to obtain an expression for the expected value of runoff volume.

How can you develop exponential models to represent and interpret situations?