The two-way table summarizes information about eye color and gender in a random sample of 200 high school students.

permaneceerc 2021-08-14 Answered
The two-way table summarizes information about eye color and gender in a random sample of 200 high school students. 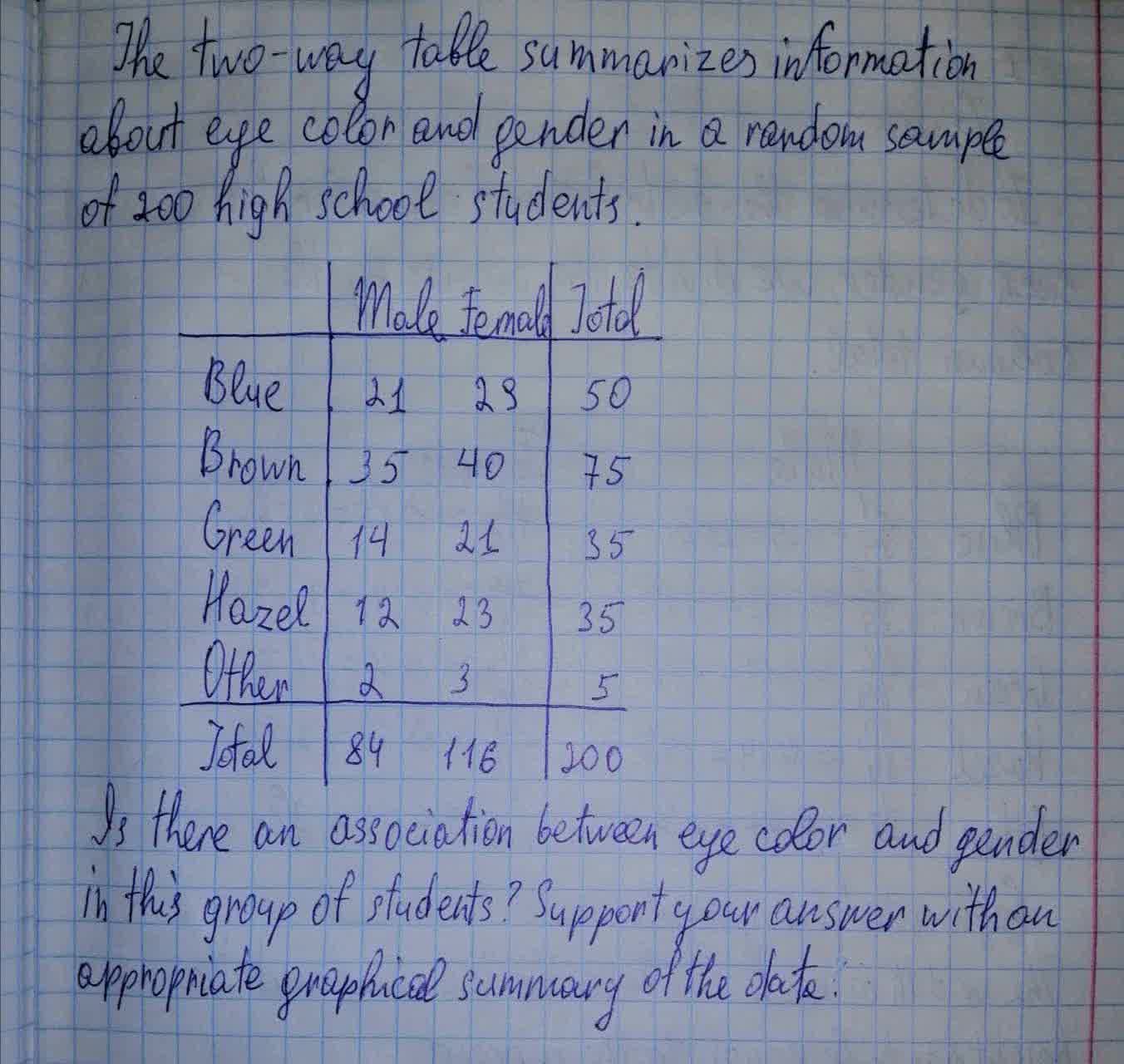 The answer is given in the photo below. 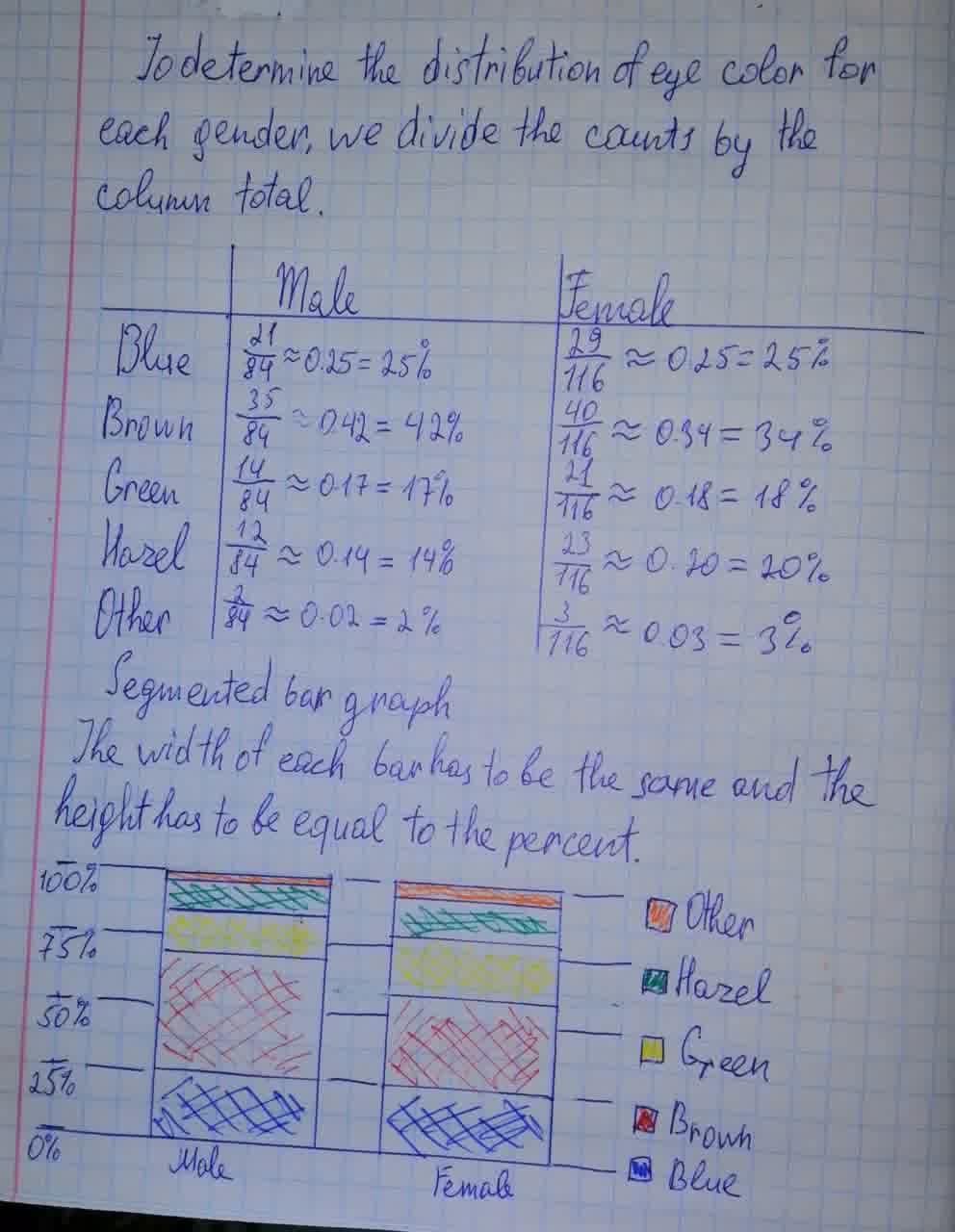 The two-way table summarizes data on whether students at a certain high school eat regularly in the school cafeteria by grade level.

If you choose a student at random who eats regularly in the cafeteria, what is the probability that the student is a 10th-grader?

A survey of 4826 randomly selected young adults (aged 19 to 25) asked, "What do you think are the chances you will have much more than a middle-class income at age 30?" The two-way table summarizes the responses.

A group of 125 truck owners were asked what brand of truck they owned and whether or not the truck has four-wheel drive. The results are summarized in the two-way table below. Suppose we randomly select one of these truck owners.

What is the probability that the person owns a Dodge or has four-wheel drive?

Physical therapy (PT) may be just as successful as traditional surgery when treating a specific type of knee ligament tear in elderly patients. A group of researchers at a large teaching hospital conduct a trial in which patients are randomly assigned to one of three treatments. A "success" means that the subject had regained full range of motion in their knee 6 months post- treatment.

When analyzing their data, which test would be appropriate for these researchers to use?
Chi-square test of/for

Researchers carried out a survey of fourth-, fifth- and sixth-grade students in Michigan. Students were asked whether good grades, athletic ability, or being popular was most important to them. The two-way table summarizes the survey data.

Suppose we select one of these students at random. What's the probability of each of the following? The student is not a sixth-grader and did not rate good grades as important.

What are the mean and standard deviation of a binomial probability distribution with n=12 and ?

A new vaccine was tested to see if it could prevent the ear infections that many infants suffer from. Babies about a year old were randomly divided into two groups. One group received vaccinations, and the other did not. The following year, only 328 of 2460 vaccinated children had ear infections, compared to 508 of 2453 unvaccinated children. Complete parts a) through c) below. a) Are the conditions for inference satisfied? A. Yes. The data were generated by a randomized experiment, less than 10% of the population was sampled, the groups were independent, and there were more than 10 successes and failures in each group. B. No. It was not a random sample. C. No. The groups were not independent. D. No. More than 10% of the population was sampled.

Evaluate each expression for the given values
5y-3z+4y-1z-3y when y=3 and z=-2
Find the converse and the contrapositive of the statement.

What is the inverse?
What is the contrapositive?
Given a sample show, using the definition of completeness, that the statistic is not complete for . Use the fact that
The statistic is said to be complete for the distribution of if, for every misurable function ,
We have provided simple data sets for you to practice the basics of finding a population mean.
2, 5, 0, −1
What is the primary objective of sampling from a population?
The average number of students per class at school is and the average number of students per class at school is . Given that there are more classes in school than in school , is the average number of students per class for both schools combined less than ?
A random sample of 5,000 people is selected from local telephone book to participate in financial planning survey to help infer about typical saving and spending habits. three thousand return the questionnaire. Describe the types of bias that may result in at least 4-5 complete sentences.
In Traditional Survey Reseach, elaborate what are;
1. Nonresponse Bias
2. Refusal rate
3. Response Bias
From numbers all sets of numbers are chosen and their averages computed. Will the average of these averages be equal to the average of the numbers?