Jasleen Behl Friday, January 17, 2014 Average, Quantitative Aptitude
Today I'm going to start a new topic of quantitative aptitude  i.e. Average. It is a very simple topic and just involves simple mathematical calculations. Average concept has various applications. I will discuss its applications in next session. Firstly I will try to make you understand the basics of this topic.

Average is just a mean value of all the given observation or i can say it is an arithmetic mean of observations.

***But, remember that this formula does not directly applies on average speed. Discussed in special cases***

i) Average lies between maximum and minimum observation.

For example: Assume the previous set of observations. If `2` is multiplied with all observations, then new observations will be as follows:

For example: Continuing with the same example. If `2` is added to all observations, then new observations will be as follows:

iv) Similarly, if each observation is divided by some number, then average will also be divided by same number.

For example: If `2` is divided from all observations, then new observations will be as follows:

Therefore, I can say any general operation applied on observations will have same effect on average.

Example3: Out of three numbers, second number is twice the first and is also thrice the third. If average of these numbers if `44`, then find the largest number.

Example4: Average of four consecutive even numbers is `27`. Find the numbers.

Suppose a man covers a certain distance at x km/hr and covers an equal distance at y km/hr. The average speed during the whole distance covered will be `(2xy)/ (x+y)`

*I will soon update a video lesson of this concept that how this formula has been derived.*

Example5: A bike covers certain distance from A to B at `50` km/hr speed and returns back to A at `56` km/hr. Find the average speed of the bike during the whole journey. 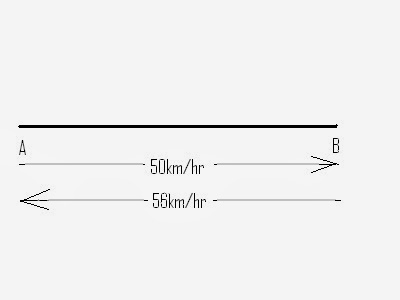