A 0.30 kg ladle sliding on a horizontal frictionless surface isattached to one end of a horizontal spring (k = 500 N/m) whoseother end is fixed. The l

A 2.4-kg object is attached to a horizontal spring of forceconstant k=4.5 kN/m. The spring is stretched 10 cm fromequilibrium and released. Find (a) the frequency of themotion, (b) the period, (c) the amplitude, (d) the maximum speed,and (e) the maximum acceleration. (f) When does the objectfirst reach its equilibrium position? What is itsacceleration at this time?
Two identical blocks placed one on top of the other rest on africtionless horizontal air track. The lower block isattached to a spring of spring constant k= 600 N/m. Whendisplaced slightly from its equilibrium position, the systemoscillates with a frequency of 1.8 Hz. When the amplitude ofoscillation exceeds 5 cm, the upper block starts to slide relativeto the lower one. (a) What are the masses of the twoblocks? (b) What is the coefficient of static frictionbetween the two blocks?

A 10 kg objectexperiences a horizontal force which causes it to accelerate at 5 \(\displaystyle\frac{{m}}{{s}^{{2}}}\), moving it a distance of 20 m, horizontally.How much work is done by the force?
A ball is connected to a rope and swung around in uniform circular motion.The tension in the rope is measured at 10 N and the radius of thecircle is 1 m. How much work is done in one revolution around the circle?
A 10 kg weight issuspended in the air by a strong cable. How much work is done, perunit time, in suspending the weight?
A 5 kg block is moved up a 30 degree incline by a force of 50 N, parallel to the incline. The coefficient of kinetic friction between the block and the incline is .25. How much work is done by the 50 N force in moving the block a distance of 10 meters? What is the total workdone on the block over the same distance?
What is the kinetic energy of a 2 kg ball that travels a distance of 50 metersin 5 seconds?
A ball is thrown vertically with a velocity of 25 m/s. How high does it go? What is its velocity when it reaches a height of 25 m?
A ball with enough speed can complete a vertical loop. With what speed must the ballenter the loop to complete a 2 m loop? (Keep in mind that the velocity of the ball is not constant throughout the loop).

In the overhead view of, a long uniform rod of mass m0.6 Kg is free to rotate in a horizontal planeabout a vertical axis through its center .A spring with force constant k = 1850 N/m is connected horizontally betweenone end of the rod and a fixed wall. When the rod is in equilibrium, it is parallel to the wall. What isthe period of the small oscillations thatresult when the rod is rotated slightly and released? 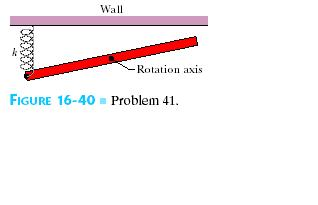 As depicted in the applet, Albertine finds herself in a very odd contraption. She sits in a reclining chair, in front of a large, compressed spring. The spring is compressed 5.00 m from its equilibrium position, and a glass sits 19.8m from her outstretched foot.
a)Assuming that Albertine's mass is 60.0kg , what is \(\displaystyle\mu_{{k}}\), the coefficient of kinetic friction between the chair and the waxed floor? Use \(\displaystyle{g}={9.80}\frac{{m}}{{s}^{{2}}}\) for the magnitude of the acceleration due to gravity. Assume that the value of k found in Part A has three significant figures. Note that if you did not assume that k has three significant figures, it would be impossible to get three significant figures for \(\displaystyle\mu_{{k}}\), since the length scale along the bottom of the applet does not allow you to measure distances to that accuracy with different values of k.

A box is sliding with a speed of 4.50 m/s on a horizontal surface when, at point P, it encounters a rough section. On the rough section, the coefficient of friction is not constant but starts at .100 at P and increases linerly with distance past P, reaching a value of .600 at 12.5 m past point P. (a) Use the work energy theorem to find how far this box slides before stopping. (b) What is the coefficient of friction at the stopping point? (c) How far would the box have slid iff the friciton coefficient didn't increase, but instead had the constant value of .1?