An airplane is traveling 25 degrees west of north at 300 m/swhen a wind with velocity 100 m.s directed 35 degrees east of northbegins to blow. Using graphical methods, determine the speedand direction of the resultant velocity. 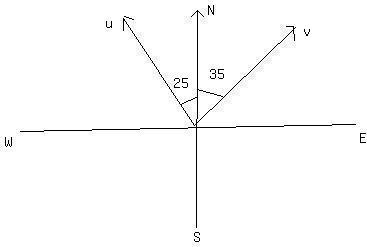 A golf ball lies 2.00 m directly south of the hole on a levelgreen. On the first putt, the ball travels 3.00 m along astraight-line path at an angle of 5 degrees east of north; on thesecond putt, it travels a straight-line distance of 1.20 m at anangle of 6 degrees south of west.
What would be the displacement ofa third putt that would put the ball in the hole?
The answer in the back of the book is 1.3 m at 43 degreessouth of east. How do I get that?

An airplane starting from airport A flies 300 km east, then 350 km at 30 degrees west of north and then 150 km north to arrive finally at airport B. The next day, another plane flies directly from A to B in a straight line. In what direction should the pilot travel in this direct flight? How far willthe pilot travel in the flight? Assume there is no wind during either flight.

A person stands in a stationary canoe and throws a 5.22 kgstone with a velocity of 8.20 m/s at an angle of 34.0 degrees abovethe horizontal. The person and the canoe have a combined massof 105 kg. Ignoring air resistance and effects of the water,find the horizontal recoil velocity (magnitude and direction) of the canoe.