Chardonnay Felix 2021-03-06 Answered
A 30.0 kg block is resting on a flat horizontal table. On topof this block is resting a 15.0 kg block, to which a horizontal spring is attached. The spring constant of the spring is 325 N/m. The coefficient of kinetic friction between the lower block and the table is 0.600, and the coefficient of static friction between the two blocks is 0.900. A horizontal force is applied to the lower block. This force is increasing in such a way as to keep the blocks moving at a constant speed. At the point where the upper block begins to slip on the lower block,determine (a) the amount by which the spring is compressed and (b) the magnitude of the force F.
Ask Expert 1 See Answers
You can still ask an expert for help
Your answer

At the point where the upper block begins to slip, the spring force is equal to (actually, slightly greater than) the frictional force

Just before this time, the forces acting on each block give rise to an acceleration, which is the same for both blocks


Solving each of these equations for a and equating

Substitute the value for x from above, then solve thisequation for F

A radar station, located at the origin of xz plane, as shown in the figure , detects an airplane coming straight at the station from the east. At first observation (point A), the position of the airplane relative to the origin is . The position vector has a magnitude of and is located at exactly above the horizon. The airplane is tracked for another } in the vertical east-west plane for , until it has passed directly over the station and reached point B. The position of point B relative to the origin is (the magnitude of is ). The contact points are shown in the diagram, where the x axis represents the ground and the positive z direction is upward. 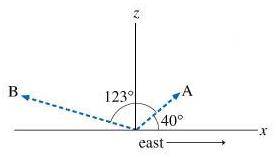 Define the displacement of the airplane while the radar was tracking it: . What are the components of
Express in meters as an ordered pair, separating the x and z components with a comma, to two significant figures.

A golfer hits a golf ball at an angle of 25 degrees to the ground. If the golf ball covers a horizontal distance of 301. 5 m, what is the ball's maximum height? (Hint: at the top of its flight, the ball's vertical velocity component will be zero.)

Four very long, current-carrying wires in the same plane intersect to form a square with side lengths of 45.0 cm, as shown in the figure blelow. The currents running through the wires are 8.0 A, 20.0 A, 10.0 A, and I. 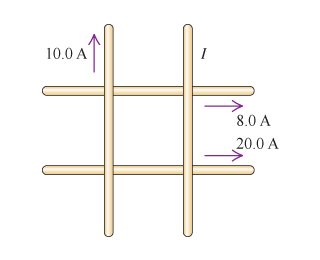 A stream of water strikes a stationary turbine bladehorizontally, as the drawing illustrates. The incident water streamhas a velocity of +18.0 m/s, while the exiting water stream has avelocity of -18.0 m/s. The mass of water per second that strikesthe blade is 17.0 kg/s. Find themagnitude of the average force exerted on the water by theblade.

Please, solve the system of equations:

A coin with a diameter of 2.40cm is dropped on edge on to a horizontal surface. The coin starts out with an initial angular speed of 18.0 rad/s and rolls in a straight line without slipping. If the rotation slows with an angular acceleration of magnitude 1.90 rad/s, how far does the coin roll before coming to rest?