Determine the constant that should be added to the binomial so that it becomes a perfect square trinomial, write and factor the trinomial. x^2−3x.

Factor the trinomial shown below. Show that your factorization is correct by multiplying the two binomial factors.
\(5x^{2}+13x-6\)

A paraglider is flying horizontally at a constant speed.Assume that only two forces act on it in the vertical direction,its weight and a vertical lift force exerted on its wings by theair. The lift force has a magnitude of 1800 N.
(a) What is the magnitude and direction of the force that theparaglider exerts on the earth ?
(b)If the lift force should suddenly decrease to 1200 N, whatwould be the vertical acceleration of the glider ? For bothquestions, take the upward direction to be the + y direction.

Two light sources of identical strength are placed 8 m apart. An object is to be placed at a point P on a line ? parallel to the line joining the light sources and at a distance d meters from it (see the figure). We want to locate P on ? so that the intensity of illumination is minimized. We need to use the fact that the intensity of illumination for a single source is directly proportional to the strength of the source and inversely proportional to the square of the distance from the source.

Your town is installing a fountain in the main square. If thewater is to rise 25m(82feet)above the fountain,how much pressuremust the water have as it moves slowly toward the nozzle thatsprays it up into the air?
Rather than putting a pump in the fountain(previous question)the engineer puts a water storage tank in a nearby high risebuilding.How high up in that building should the tank be for itswater to rise 25m when spraying out thefountain?(neglect friction)

The dominant form of drag experienced by vehicles (bikes, cars,planes, etc.) at operating speeds is called form drag. Itincreases quadratically with velocity (essentially because theamount of air you run into increase with v and so does the amount of force you must exert on each small volume of air). Thus
\(\displaystyle{F}_{{{d}{r}{u}{g}}}={C}_{{d}}{A}{v}^{{2}}\)
where A is the cross-sectional area of the vehicle and \(\displaystyle{C}_{{d}}\) is called the coefficient of drag.
Part A:
Consider a vehicle moving with constant velocity \(\displaystyle\vec{{{v}}}\). Find the power dissipated by form drag.
Express your answer in terms of \(\displaystyle{C}_{{d}},{A},\) and speed v.
Part B:
A certain car has an engine that provides a maximum power \(\displaystyle{P}_{{0}}\). Suppose that the maximum speed of thee car, \(\displaystyle{v}_{{0}}\), is limited by a drag force proportional to the square of the speed (as in the previous part). The car engine is now modified, so that the new power \(\displaystyle{P}_{{1}}\) is 10 percent greater than the original power (\(\displaystyle{P}_{{1}}={110}\%{P}_{{0}}\)).
Assume the following:
The top speed is limited by air drag.
The magnitude of the force of air drag at these speeds is proportional to the square of the speed.
By what percentage, \(\displaystyle{\frac{{{v}_{{1}}-{v}_{{0}}}}{{{v}_{{0}}}}}\), is the top speed of the car increased?
Express the percent increase in top speed numerically to two significant figures.

Fill in each blank so that the resulting statement is true. "After performing polynomial long division, the answer may be checked by multiplying the ____ by the ____, and then adding the ____. You should obtain the ____."

Consider the curves in the first quadrant that have equationsy=Aexp(7x), where A is a positive constant. Different valuesof A give different curves. The curves form a family,F. Let P=(6,6). Let C be the number of the family Fthat goes through P.
A. Let y=f(x) be the equation of C. Find f(x).
B. Find the slope at P of the tangent to C.
C. A curve D is a perpendicular to C at P. What is the slope of thetangent to D at the point P?
D. Give a formula g(y) for the slope at (x,y) of the member of Fthat goes through (x,y). The formula should not involve A orx.
E. A curve which at each of its points is perpendicular to themember of the family F that goes through that point is called anorthogonal trajectory of F. Each orthogonal trajectory to Fsatisfies the differential equation dy/dx = -1/g(y), where g(y) isthe answer to part D.
Find a function of h(y) such that x=h(y) is the equation of theorthogonal trajectory to F that passes through the point P.

A resort is situated on an island that lies exactly 4 miles from P, the closest point to the island along a perfectly straight shoreline. 10 miles down the shoreline from P is the nearest source of water. If it costs 1.6 times as much money to lay pipe in the water as it does on land, how far down the shoreline from P should the pipe from the island reach land with minimum total constructions costs? 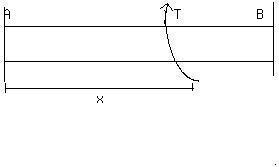